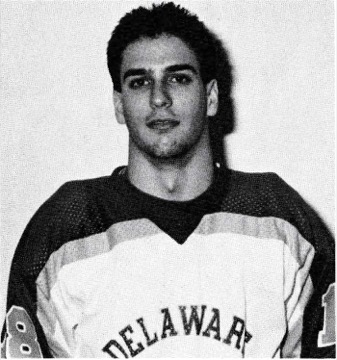 1985-86 – Tony steps up to the varsity this year after playing a year of JV.  He has good skating talent and could prove to be a valuable player with experience

1986-87 – Although small, Tony makes up for his size with his skillful puck handling. His style of play is a welcomed addition to round out the Delaware squad. Tony also enjoys cooking and synchronized swimming.

1988-88 – Tony is a product of the Pittsburg area hockey program. He has a solid foundation in skating as evidenced by his smooth stride and deceptive moves. Tony plays predominantly at center and this gives him an opportunity to take the role of a playmaker. Tony hails as the team’s best dressed player.

1988-89 – Tony is a talented hockey player. He should have an opportunity to show his ability this season. Tony is also the secretary for the hockey team.