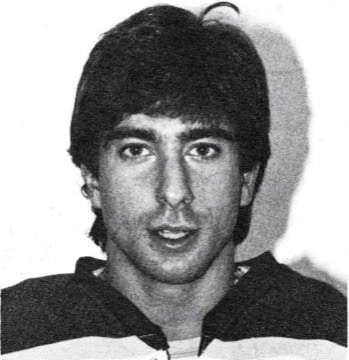 1982-83 – Serving as a captain of his Marple-Newtown High School team, Scot finished his four year varsity career as an all-star center. Scot plans to graduate with a Business degree.

1983-84 – Another pleasant surprise on last years team was the sleek forward from Broomall, Pa. Scott is one of the league’s fastest skaters and has developed into a fine penalty killer. “Rabbi” should also pick up some points this year due to his scoring and playmaking abilities. Scot has also been known to enjoy an occasional “Tasty Tennessee Smoke.”

1984-85 – One of the most offensive minded players on the team, Scot has been a steady scorer for the Hens. This success is very much attributable to his quickness. His intensity is an incentive to the whole team to play well.