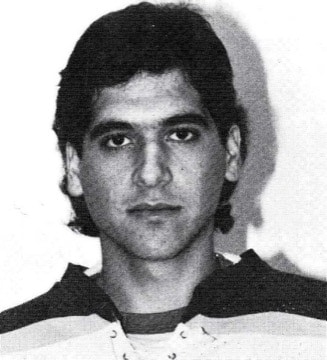 1983-84 – Although learning hockey in the north, Phil played for William Penn High School and the Wilmington Wheels. Phil now resides in New Castle, Delaware and hopes to become a lawyer.

1984-85 – Phil is listed as a defenseman on the team roster, but his flexibility allows him to play offense also. A very strong skater, Phil should be able to contribute to the Hen offense as well as keep the goals against average down.

1985-86 – Phil moved from defense to offense last year and the switch paid big dividends. He should see regular action on the right wing and is a genuine scoring threat. During the summer, Phil spends a lot of time on skates. He is an official for amateur youth hockey and he instructs at the Wilmington Hockey School.

1986-87 – This is Phil’s third year as a member of the Blue Hen squad. His style of play is noticeably graceful, with strong skills in every facet of the game. Last year Phil was injured early in the season, putting a damper on his year. This year we hope to see a great deal of production and leadership from this room-wrecking veteran.