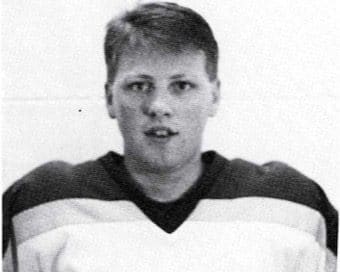 1987-88 – Frankie is a product of local William Penn High School. As the season progresses and Frankie gets more experience, he hay see time playing center. When not playing hockey Frankie is hard at work getting his nursing degree.

1988-89 – Frank saw some time last year in varsity games. He is good on faceoffs and may see ti me on the penalty killing unit. Frank is serving as this year’s Public Relations officer.

1989-90 – Frank, who is returning for his third year at center, will be looked for to continue his steady play. He is a good face-off man, and isn’t afraid to bump and grind in the corners. Frank is also taking an active leadership role as this year’s secretary.

1990-91 – Frank returns to the line-up for his fourth season. As being one of the more experienced Blue Hens he will be looked upon in many of the Hen’s key situations. Frank’s knowledge of the game and ability to win important face-offs in the offensive and defensive zones will assure his spot in the line-up, like the seasons in the past.