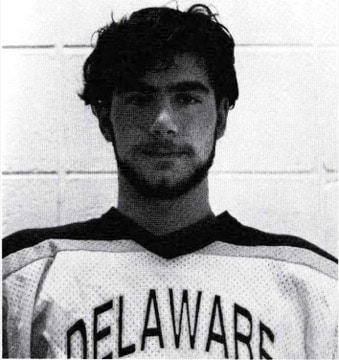 1987-88 – A freshman migrant from the great northeast, Doug has dis-played good hockey skills. Doug hails from Connecticut where the men do the cooking. Chef Rochelle has a reputation for his spicy green giant dishes.

1988-89 – Doug has a unique defensive style. His free spirited play opens up many chances for the offense. His skills with the puck some-times keep people from noticing his ability to play strong defense.

1990-91 – Doug is returning after two years off. When Doug played before he was an immediate factor to the Hens. We look forward to Doug’s maturity to lead younger defensemen as well as himself to success this season. As an offensive defenseman, Doug will be counted on for that extra scoring punch.