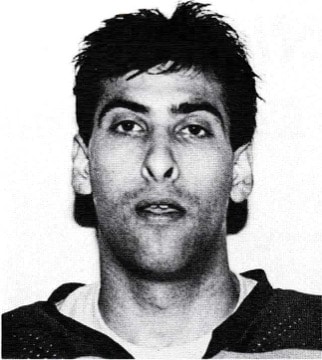 1984-85 – This first year Hen already has college hockey experience with Kean College. Dave has a hard slapshot and is very exciting to watch.

1985-86 – Dave led the team in scoring last season. He showed the ability to move the puck effectively as well as score. He has worked in the off season on upper body strength and skating, which will help him in the long grind.

1986-87 – Leading the team in scoring for the second straight year, this year’s Captain finished the sea-son with 76 points in 32 games. Dave also put the puck through the net against Maryland last year, but the goal was disallowed even though a hole was detected in the net when the play was blown dead.