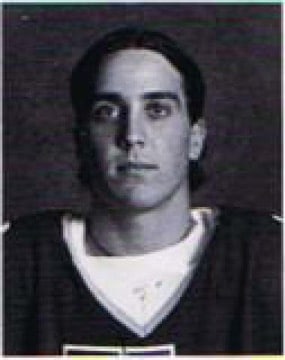 1995-96 – Brian was Captain of the Upland Hockey Association Midget AA where he led his team in scoring with 45 goals and 42 assists in 31 games. Upland schedule included New England prep schools such as Trinity Pauling and Canterbury as well as teams from Eu­rope. Brians accomplishments include the prestigious Jack Nauer Memorial award for leadership, teamwork and sportsmanship. Brian has the potential to be an explosive scorer for the Blue Hens this year and has the honor of wearing previous Blue Hen great Jason Bergeys number 12.

1996-97 – “Mitch” enters his sophomore season after a successful offensive rookie year with the Hens, tallying 37 points in 24 games. Mitchell’s speed,  combined with sheer hockey skill, is sure to frustrate opponents as he looks to the ’96-’97 season. Look for Mitch to be among Delaware’s top scorers again this season.

Hockey gears up for stretch run