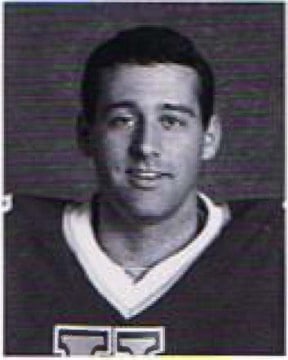 1992-93 – Aaron’s hard work earned him a spot on this year’s roster, with continued im­provement he could see ice time for the Hens this season.

1993-94 – Aaron enters his second season with the Hens with an important role this year. With a years experience under his belt, he has improved and is looking to be a impact player. Aaron is a good team player with an excellent attitude.

1994-95 – Aaron is entering his third season as a Hen forward, and looks to make it his most prosperous. Aaron has been working his way up the Hen ranks the last two years and is ready to assume a leadership role. He is hardworking in the offensive zone. Look for Aaron to produce points for the Hens this year.

1995-96 – Aaron’s steady play was invaluable to the Hens last season. He contributed at both ends of the ice and scored 20 points in 26 games. Look for Aaron to contribute as a two way forward in his Junior season, after going through his extensive off ice training program.

1996-97 – In his senior year with the Blue Hens, Aaron hopes to use his physical play and hockey instinct to help Delaware defend the ECHA Championship.